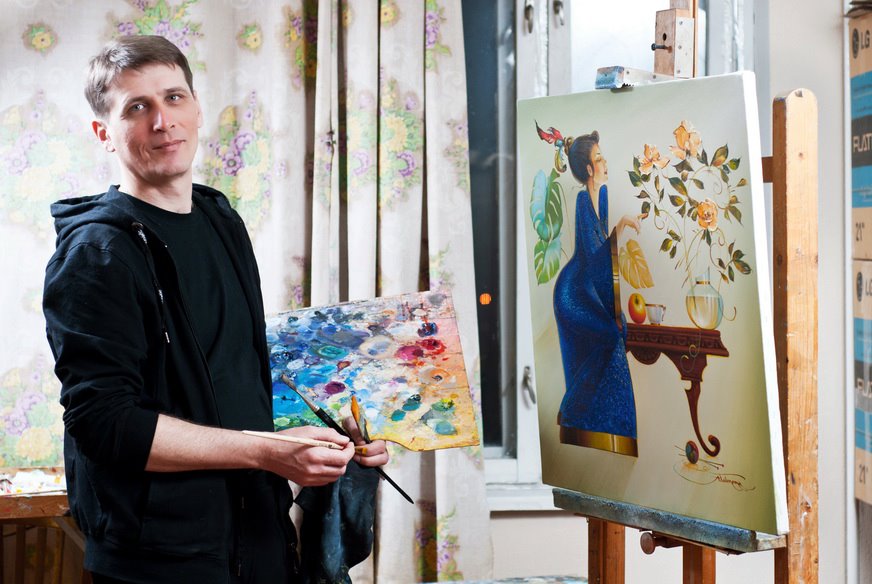 Alexander Gaytota born 18 September 1967 in Krivoy Rog Dnipropetrovsk region, where he spent the first ten years of his life. A pleasure of his early childhood was spending time in a fine arts studio where he engaged in activities such as “wood burning” and model making. Here a feeling was born inside of him. He acquired a sense of beauty, forming his taste along with his aspirations for creativity. Basically, that’s how the art was born in his soul.

In 1997 his family moved to Komsolmosk in the Potava Region. The lush and green landscape combined with the Dnepr River made a huge impression on the young artist. Here for the first time the beauty of nature’s silent creeks was opened up to him. The beautiful reeds and snags sticking fancifully out of the water alongside wood clearings filled in with the vibrant beams of the sun. His first hundred or so sketches were in pencil, but soon the young Alexander began to master the art of color.

In 1978 he arrived at the Komsomuldka Children’s Art School in the second class, skipping the first due to his prodigious nature. He participated in regional reviews, competitions, exhibitions and received many thank you letters, awards and trophies.

In 1981 he graduated the school with honors.

In 1985 through 1987 he served in the army where he worked as an art designer. After demobilization, he engaged in painting as a free artist and continues to do so today.

Alexandr independently masters new techniques as well as coping the works of recognized masters, all of it certainly reflective of his creativity. His works are various, both on subject and execution. In creating his works, Alexander uses different techniques, picking the one which most precisely allows the spectator to experience the emotional message of the author. As he says..” I simply compose the work and then in one way or another I will arrange it depending on semantic and emotional feeling.”

At the same time, the artist has own style or handwriting on which it is possible to recognize him.

In 1997 he created a collection of work titled: QUEEN, which he replenishes to this day. Now he has created a new collection titled: DOLL STORIES.

His basic style or direction is one of surrealism, although recently the artist has been working in impressionism, experimenting with a mixture of styles harmonized together on one canvass.

He his works are in private collections throughout the world in countries including Germany, Italy, France, England, Switzerland, Spain, Holland, Canada, Australia, America, Russia, and of course the Ukraine.